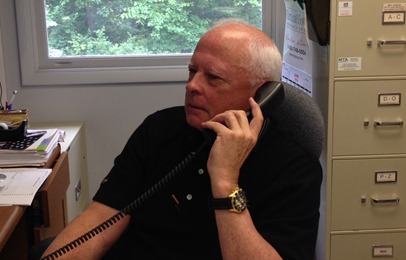 "The true measure of a man is how he treats someone who can do him absolutely no good."

"Politics, it seems to me, for years, or all too long, has been concerned with right or left instead of right or wrong."

"Divide and rule, a sound motto. Unite and lead, a better one."

"There comes a time when one must take a position that is neither safe, nor politic, nor popular, but he must take it because conscience tells him it is right."

Born in Ann Arbor and raised in Pittsfield Township, Harley Rider and his wife, Vita, moved to the Dexter area in 1978 so their two children could benefit from the values of the Dexter community.

Harley spent 38 years in law enforcement, finally retiring in 2012. During his career at the Washtenaw County Sheriff's Department, Harley served as Commanding Officer of the Dexter Contract Station and Commanding Officer of the Traffic Services Section. He also was elected as President of the Washtenaw County Command Officers Association and served as co-chair of the Huron Valley Traffic Safety Committee. During his career at the Huron-Clinton Metroparks, Harley served as Chief Ranger and as Commander with the Metroparks Police Department. Harley Rider also helped organize the Washtenaw Police Academy and served as a senior instructor and part-time coordinator.

Harley serves Dexter Township as a representative to the Dexter Area Fire Department Administrative Board (former Chair), the Multi-Lakes Water & Sewer Authority Board (former Chair), the Western Washtenaw Area Value Express (WAVE) Board, and as the Township's representative to the Washtenaw Area Transportation Study Policy Committee and the South-East Michigan Council of Governments (SEMCOG).

Harley Rider is a graduate of Eastern Michigan University and the Northwestern University School of Police Staff and Command. He has also taken graduate courses in Public Fund Accounting and Intergovernmental Relations at EMU, as well as numerous training seminars presented by the Michigan Townships Association and the Michigan Municipal Clerks Association. Harley also served with the U.S. Navy SeaBees in Vietnam in 1968/1969.